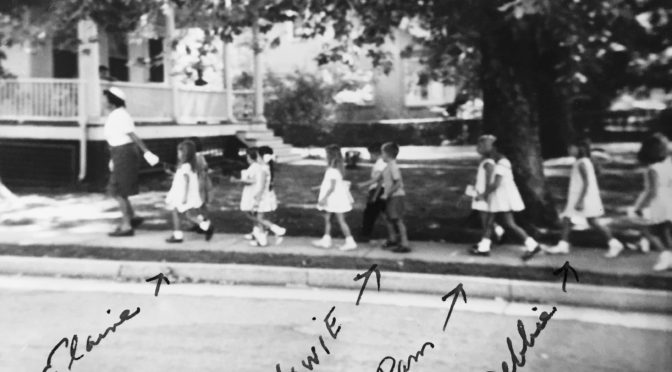 Pam was my neighbor. She was my best buddy.

It was 1965. Or was it ’64? It was the 60s. One thing’s for sure: Our Fair Haven kindergarten class was the last to have its first year of school at what was called the Youth Center, now the Fair Haven Police Station and Community Center on Fisk Street.

We kindergarteners were also the last to be tugged down the street on a rope, yes a rope, headed by an official-looking police-type lady.

I forget what her name was, but she scared the bejesus out of us, especially a determined mini me. No, not much has changed.

However, that rope would have probably somehow been considered inhumane now, I’m thinking. Hey, they needed to keep us in tow — lucky little Fair Haven duckies all in a row.

And, guess what? They did, despite the fact that this one little girl’s small world was turned topsy turvy because she couldn’t walk next to Pam.

There were loops for our little hands to grasp onto on either side of the rope.

You see, no one drove anyone to school then. There were no lines of SUVs skirmishing to get the best drop-off spot. No quibbles over sidewalks or no sidewalks, safest routes, trees, or who has the best interests of kids covered best.

You could say that we were more environmentally conscious. Or you could just say that we were probably poorer, happier to put our trust in the rope lady, and less likely to hover because helicopter parents weren’t a thing yet. Simple.

No one drove kids to school, mostly because the norm was only one car per family and the walk was considered healthy and usually not all that far. There was no Third Street congestion problem. Nope.

Granted, a lot of moms stayed home. And when the dads went to work, unless they worked close enough to come home for lunch, mom didn’t have access to a car until after 5 p.m.

If moms worked, dads dropped them off and picked them up or vice versa. A lucky few had two cars. But they stayed in the driveway. Rides to school were rare. So, needless to say, the transportation for kids was that rope. That lady picked us all up, as I recall, on Hance Road somewhere.

That rope — well, that was our kiddie bus. And we liked it — sorta. We just had to.

This kindergarten class in the Retro Pic of the Day was the last to take the daily rope trek to the Youth Center.

And, in this Retro Pic of the Day, there you have it — the line-up and the walk. The rope walk. That was the look. That was the way school started for kindergarteners. School days, rope days …

Imagine that. Mommy drops you off at the rope, not the bus, and you have to walk to school next to someone you didn’t know until the first day of school? There’s a quick way of getting acquainted.

Oh, the trauma of it all. Not really. How lucky we were. Somehow, we endured the rope and thrived. In fact, the RFH Class of ’78, some of whom are pictured in this rope walk, reunited last summer and extolled the virtues of  THE ROPE. We even thought it might be a banner idea to cross the street in Sea Bright on our own version of the rope revisited. That vision was toppled by summer traffic and a waning party spirit. But, the rope was in hand somewhere.

Then again, without the proper crossing guard, like Mrs. Breckenridge, or rope tow leader, like Mrs. McDaniel, we fell out of line.

How’s that for roping in some safety concerns on the first day of school? Now, CROOOOOSSSSS!