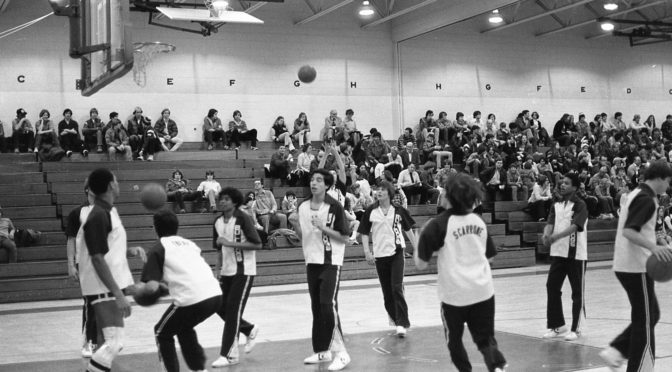 A twirly halftime show on the RFH Basketball court was the feature of one of last week’s Retro Pics of the Day. It was all about the twirl and the traditional celebration of the game with that show of support and skilled entertainment half way through. But then there were those guys they were championing.

Those guys, back in the 1970s, aspired to be a bit like the famed Harlem Globe Trotters, dribbling, dodging and slam-dunking their way to success. Oh, they had lots of balls in the air heading toward their goals. Though they may not been quite as fancy and entertaining as the Trotters, they sure did try. It’s a 70s thing.

In fact, talent in the sport ran in RFH families. For instance, there’s someone on this court who went on to have a son who became an RFH Basketball legend of sorts and an officer of the law in Fair Haven.

Balls in the air, an alley-oop and a little dribble aside, there’s no fast break to what’s going on in this photo by George Day, but one can jump through hoops to hazard a guess. Foul shot? No. There are three balls, nine players and an audience. RFHer Andrew Davidson, center court with gaping mouth, looks like he just shocked himself with an impromptu soccer move.

The b-ball appears to have bounced mid-air right from his head. Probably not. It’s just one of those candid moments of a player’s hoop-bound shot caught up in the air and landing on film. Yes, it was film back in the 70s age of the RFH dinosaur.

So, let’s celebrate the game and the players. Take a shot at who’s in this RFH home game photo and what’s at play here. Who’s the basketball champ with the son who followed in his footsteps? Who were the coaches? Can you caption this?