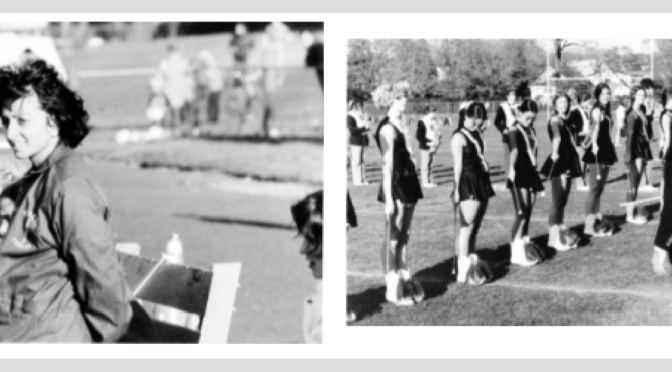 The usual chatter about the Super Bowl halftime is incessant. And much like the seemingly nonstop beat, beat, beat of the music, those memories of the steady ol’ high school marching band rhythm drone on in the minds of retro thinkers. So, we march to the beat and remember those RFH halftime shows of yesteryear. The memories are all about the high school band and a timeless show that hasn’t seen its football field stage or basketball court in decades.

It’s the show of those twirlers. The outfits were far more modest than those of any Super Bowl halftime of more recent years, even decades. Then again, girls in the 1970s had just recently been gifted (ouch) the right to wear pants, UNDER, dresses, in the bitter cold. Remember that one? So, showing legs was always not only acceptable, but required. Hmmmmm …

And while there were no plunging necklines or pole dancing at RFH, twirlers and drill team gals whirled and paraded in tasseled boots, a far cry from the go-go boots made for walkin’ by Nancy Sinatra. The colors were Bulldog purple and white. And it was either a rifle or a baton that was being fancily twisted and tossed about. Now, that was entertainment!

Truly. There was a very exacting skill involved and hours of practice. And there were fearless leaders of the twirl.

So, the Retro Pic of the (George) Day honors the art of the twirl show on the football field and the RFH Twirl Team’s master leader, Arlene Albano, an RFH math teacher who has since passed away. Known as a forward thinker and great teacher, Albano brought out the best in many RFH students and twirlers alike.

In the photo of the girls on the field, too, there’s another leader conducting the band’s beat. That would be Ken Walter. Remember him?

Every show has a director and a producer. These were RFH’s mentors and halftime show leaders. Remember Arlene Albano and Ken Walter? Who was your favorite RFH leader on or off the field or court?

Many thanks to George Day for these gem RFH photos of the past!