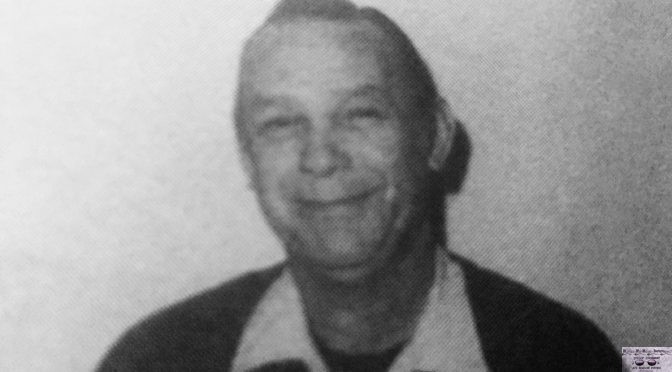 The following piece was originally published on Aug. 31, 2015. It is being re-run, with changes only in the amount of years that have passed, in memory of my father, Bill Van Develde, former longtime Fair Haven Fire Company member, president and captain of the Fire Police and chairman of the stock room at the fair, on the anniversary of his death on Aug. 31, 1983. RIP, Dad. You are missed. Thank you for all the embarrassing moments that I didn’t appreciate enough. Thank you for making Fair Haven my home. Thank you for being a real dad. See you later at the fair …

It’s been 36 years, but I can still see his face and that kooky Brylcreemed hairdo. I can still hear his crazy belly laugh and that signature “Take ‘er easy, buddy!” I can still see him slapping kids on the back, forever clutching his trusty clipboard, pencil perched behind his ear, sweat on the brow and finger wagging.

That’s the vivid, comforting ghost image of Bill Van Develde I still see and hear roaming around on the Fair Haven Firemen’s Fair grounds. He was chairman of the stockroom back in the 1970s and 80s and he was my quirky, big-hearted dad.

He drove the kids nuts, running them all over the fair grounds, shuttling stuff from the stock room to the booths and back. It was rare to see him sitting down.

He loved the fair; and he was all about the business of keeping things stocked.

And 36 years ago on Aug. 31, he died at the age of 57. It was fair time. He didn’t make it that year. It was a first. The fair grounds that were usually robust with the nuances of yet another fair character seemed still and sullen.

Some of those kids he had regaled with his bad jokes, drove a little loopy in the name of the fair and back-slapped into a fair oblivion were now young men. One was there in the ambulance with the First Aid Squad rushing him to the hospital days before. A few ended up being teary-eyed pallbearers, missing his annoyingly caring way.

The notion that such simple gestures of volunteerism and community compassion mattered became very clear when I — a 23-year-old a little too impressed with pretense for Dad’s taste — was smacked upside the head with poignant gratitude the day of his funeral.

The tears and heads bowed in sadness, casket hoisted into that shiny, white, flower-laden firetruck — the far-reaching impact of one simple guy who just gave a crap, as his no-frills self would have said.

He just did what he did because it was the right thing to do to be part of a community, he enjoyed it and he cared. A lot. And he cared the right way — just because. He didn’t want, even rejected, any public accolades and even as much as a pat on the back.

He used to joke that when he “croaked,” he wanted “no damn rigamarole.” Sorry, Dad, they couldn’t help it. You deserved it.

I still see him darting past me at the fair, pencil poised for that checklist, hooting, hollering and hurrying. Check! And he always turns around when he sees me out of the corner of his eye and shouts, “Hey, Eya, did ya get yourself some supper? Hows about a hot dog? Got any tickets left from working with your mother? Always make sure you have a dollar in your pocket. Need a dollar?”

No, Dad, just hearing your voice and seeing your face again is priceless.

Thank you, Bill Van Develde, for bringing me to Fair Haven and giving me many fair times ever after. You are missed more than you could ever know. And, yeah, I know, calling you a dude is just plain ornery of me.

Kids, enjoy the fair with your embarrassing parents. You never know when it’ll be their last fair time.