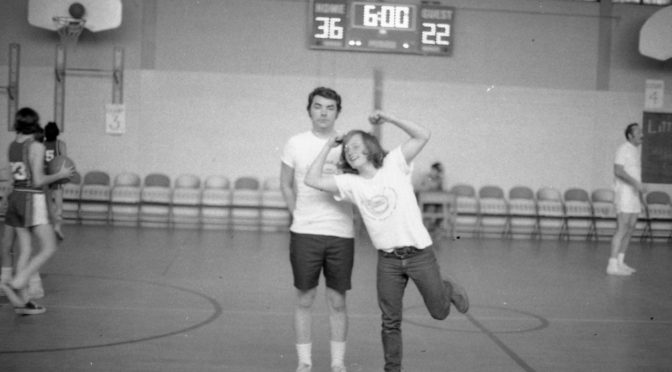 These courts are made for basketball — and jokesters. Maybe not. But, a couple of RFH guys somehow stole center court, or stage, at a basketball game in the 1970s.

While the score favored the home team, RFH, by a large margin, the hammy award went to these two. It may well have been a little post-game fan revelry with a spirited, slam-dunk one-leg stand and a little rah-rah, but only the team and a couple of errant balls in this entertaining game know for sure.

While the players took to the stage wings in this scene snapshot, there was a basket being shot, too. Never mind that, though. The spotlight was stolen by these lead pranksters.

It just goes to show that there’s always something to see and do when playing the game or stealing a dribble down to center court and running with the antic time ball.

Aaaaand court action! Know who these basketball court jesters are? What’s really going on here? Have you partaken in some RFH court antics? Your favorite moment at an RFH game?