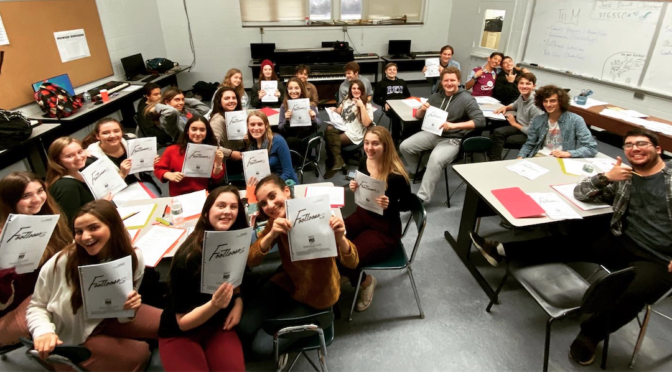 The stage at Rumson Fair-Haven Regional High School (RFH) is set for some fancy entertainment footwork as the Tower Players ready their spring musical production of Footloose.

It’s curtain up on March 6, 7 and 8 of the 80s musical adapted from the 1984 movie, screenplay by Dean Pitchford, who also wrote the stage adaptation. The movie starred Kevin Bacon.

Both on screen and stage, the show centers around the small town of Beaumont, where Chicagoan Ren McCormack (Gray Barnum) is forced to move after his parents’ divorce.

He soon discovers that the town council, influenced by the crestfallen, yet powerful, Reverend Shaw Moore (Pascal Johnstone), has outlawed all dancing. As the town teenagers, including the reverend’s rebellious daughter Ariel (Isabella Sciortino), open up to Ren, they begin to incite change by challenging the local law.

Will the governing body listen to the impassioned teenagers’ plea and opt for change? This story explores the power that one person can have to sway a collective mindset.

And, among those behind the scenes, there are some who have milestone moments to honor with this production.

With Footloose, RFH English teacher Susan Schuld will be concluding her first year as assistant director and play production coordinator.

And, after 20 years and many honors, this will be the final RFH Tower Players show for which Carole Malik is costume and props designer.

Retro trivia question: Who were the first two choices to play the lead role in the movie Footloose?