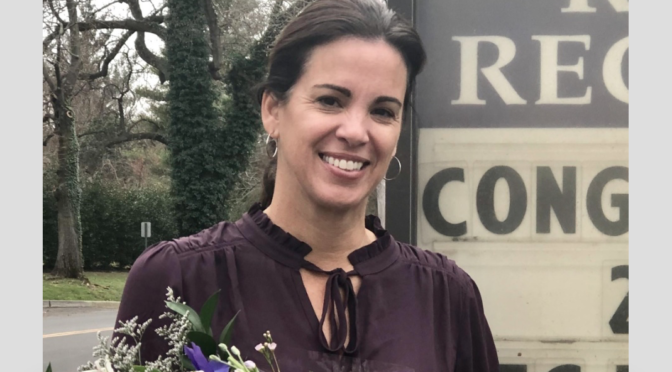 “(Christina) Gauss embodies everything that RFH stands for: she empowers her students to explore their passions, she inspires them to thrive, increases their knowledge, confidence, creativity, and compassion and truly seeks to foster global citizenship each and every day. She is an educator that others should seek to emulate in all aspects; and Rumson Fair Haven is proud to formally honor her achievements!”

That is the sentiment echoed throughout the Rumson-Fair Haven Regional High School (RFH) community and it’s the reason why Spanish teacher, advisor, mentor and community member, Christina Gauss, has been named RFH Educator of the Year for 2020.

Educator of the Year is selected annually at the end of each year for the coming year by a small group of anonymous administrators, teachers, students and parents who consider nominations from any members of the RFH school community. Gauss was chosen because she distinguished herself as an exemplary educator both in and out of the classroom.

A teacher at RFH for 14 years, Gauss has distinguished herself as an innovative educator who works in constant collaboration with her colleagues and supervisor, Seth Herman, to elevate the level of Spanish instruction and increase the cultural exposure of students in the World Language program, RFH officials said.

More specifically, the reasons why Gauss won the honor …

Regardless of the skill level of her students and their knowledge of the Spanish language, Gauss’ colleagues have praised her instructional practices and particularly admire her efforts to bring real-life materials and authentic experiences to her class. She has accomplished this through chat rooms with students in Spain, immersion experiences with younger students, Hispanic Heritage Month festivals organized at RFH, trips to el Museo del Barrio and Little Spain in New York City and classroom visits by native Spanish speakers.

Parents and students alike have called Gauss a “treasure” and a “kind, motivating and creative” teacher. She has been known to foster both a challenging and comforting atmosphere in which her students can thrive learning the Spanish language while exploring global culture.

Outside of her classroom, Gauss has accompanied students on trips sponsored and organized by RFH to Guatemala, Peru and Spain.  After studying in Spain herself in 2016, Gauss established a relationship with teachers from a bilingual school in Avila. That relationship has blossomed into an exchange program and a sister-school relationship over the past few years. This relationship has provided opportunities for students to engage in authentic communication and make connections with Spanish-speaking peers.

Aside from her distinction as an innovative and caring educator, Gauss was also recognized as an exemplary advisor to students and mentor to her colleagues within and outside of the World Language department.

Under her leadership of the Spanish National Honor Society, she has also helped to connect students with scholarship and educational travel opportunities to enhance their own learning. She has been known to also foster awareness and generosity by organizing fundraisers and events to support Spanish and Hispanic-related charitable causes around the world.

As a mentor to her colleagues both in the World Language department and in other disciplines, Gauss has been known as a leader by example, sharing her knowledge of technology and educational strategies at professional development workshops, creating interdisciplinary projects with members of other departments. She has shared her knowledge and skills as member of professional organizations such as Foreign Language Educators of New Jersey (FLENJ) and The American Association for Teachers of Spanish and Portuguese (AATSP) as well.