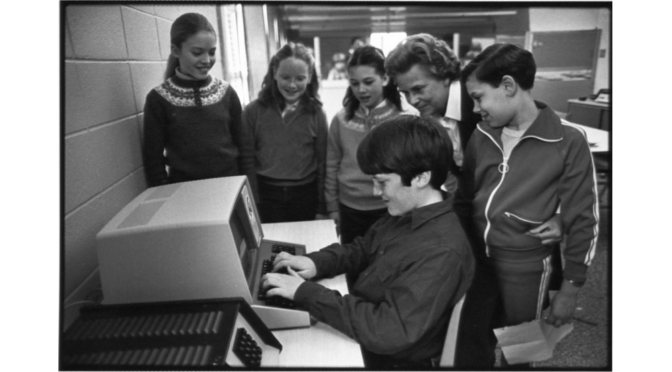 Apparently, it was considered a gifted and talented trait in the early 1980s to be well-versed in the operation of a Tandy computer — or whatever you want to call it.

This Red Bank Register photo went unpublished in March of 1982.

It shows Rumson students, clad in the oh, so traditional preppie fair isle sweaters and turtle necks, gathering around the ol’ Tandy in this promo for a “conference on gifted students for elementary school teachers and administrators to be held at Brookdale Community College on March 26,” a photo caption in the archives of the 2011 Monmouth County Library exhibit entitled Red Bank Register: 40 Photographs, 1976-1985 said. “The Model 3, released in July 1980 and sold at Radio Shack, featured a 2.03 MHz processor; it predated by more than a year the first IBM PC, introduced in August 1981.”

So, the Retro Pic of the Day takes us back to that March 13, 1982 with a copy of an unpublished Register photo of that day.

The exhibit featured the work of several Register photographers. The photos came from years’ worth of preservation of negatives from the work of Carl Andrews, James J. Connolly, Carl Forino, Dave Kingdon, Don Lordi and Larry Perna.

While the records did not indicate which photographer took the RFH shot, it’s a classic, so we’re sharing it in our look back for the day.

So, have you ever worked on a Tandy? What about a word processor? Recognize anyone?