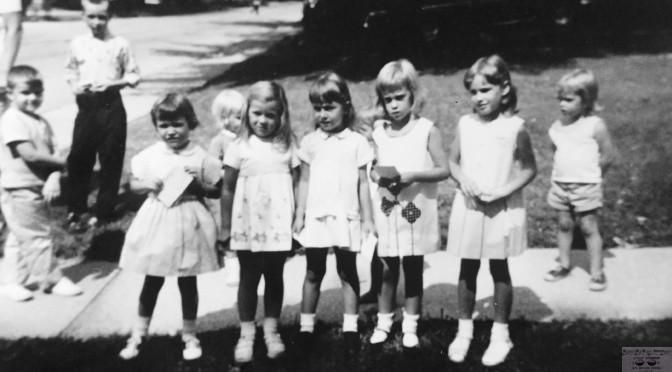 Knock-kneed, nervous and all dressed up with somewhere to go, this gaggle Fair Haven neighborhood girls of 1965 lined up so their moms could get that classic first-day-of-kindergarten shot. And there wasn’t a smile among them.

Back in the day, it wasn’t the moms who were holding back the tears (OK, maybe a few). Wrought with a bit of nausea-laced anticipation, these little girls were waiting for the Godot that was THE ROPE.

The rope, led by a very official uniform-clad lady, toted kindergarteners to class at what was the Youth Center in Fair Haven, where the police station still stands. You’ve heard all about it. But only a few survived and thrived in Fair Haven to tell the rope tales. They were those who walked in single file all the way to school. Without a peep. No one said anything about tears.

The pose? This was the classic line ’em up and shoot pose. It was a necessity back in the day. And, notice that this is not the typical first day pose these days. Back in the day, there were pictures aplenty of neighborhood kids together, along with their non-school-aged siblings straggling in the background. There were no iPhones and easy re-takes, either.

The camera that grabbed this pose was a gigantic Brownie camera with film that needed to be rolled — yes, with a little rollie crank on the side and forever fear of exposing the film to any light.

Everyone had to stand very still so there was no blurriness in the photo; and, well, photo bombers be damned. Hey, the girls’ little brothers and sisters just couldn’t get scooted out of the line of sight when Mom was holding the camera as steady as can be.

Then, it was time to break the freeze, hold back the fear, walk with the rope lady, hopefully next to your friend, and meet your teacher for the first time — ever. There were no pre-schools back then either.

So, yes, the Retro Pic of the Day honors the fearful kindergartener, that first day of school, and those moms for holding that camera and keeping the kids still and posed to capture that milestone fear freeze moment. Did someone say, “Cheese?”

Good luck to the first-time schoolers in the Rumson-Fair Haven area and everywhere! Capture your moments!