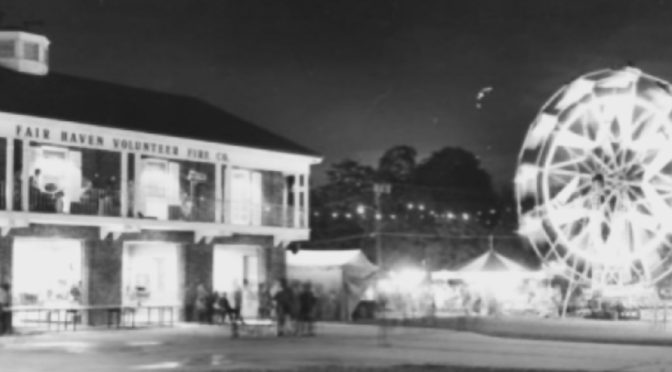 The night is still. A light is on. Trucks are out of the bays. Cartoony faces and ghosts in empty seats on unassembled carnival rides stare back in the dark. Someone’s cooking at the Fair Haven firehouse. It’s fair time.

It’s a comforting sight for the kid in this native Fair Havenite — a haunting of the best kind.

Growing up in Fair Haven at fair time — especially with parents in the fire company and “working the fair” — gave me a bottomless cache of soothing memories … the kind of memories that warm the psyche like a cup of hot chocolate toasts a kid’s frostbitten toes and heart after a cold day of sledding.

Then there are the familiar scents that bring it all back … looming wafts of cotton candy, fried food and clam chowder rolled into one.

The scents lingered on my parents, Sally and Bill, when they’d come home after a night of helping out with the cooking or counting stock.

And the memory of them walking through the door after a night on the fairgrounds, treats in hand and fair scents trailing them, is something that just sticks with a kid … and an adult.

My mother, apron still tied around her waist, would reach into a pocket and pull out a wrinkly napkin-wrapped piece of funnel cake, sandwich she didn’t finish or reject trinkets from her booth.

Dad would give my sister and me that belly chuckle of his as he handed us old, losing 50/50 tickets, saying, “See that, your father came home with the 50/50 … uh, tickets. Hardee har har har!”

I can still vividly remember the sound of that heavy, old door opening, knowing that what was on the other side embodied all that was everlasting good.

My sister and I, not to mention a gaggle of family and neighbors, helped out at the fair when we were old enough. I sported some really fashion backward 70s smock shirts and frizzy pigtails with cotton rope bows and sold balloons at “mother’s” Grab Bag Booth. On my breaks I made it my mission to win at least one stuffed animal a night.

It was a little rough working the balloons when it was firemen’s night and the beer was flowing. Though a tipsy fireman one night helped us figure out what would happen if we sucked in the helium from leaky balloons that couldn’t be sold.

Donald Duck and his fashion plate friends of the 70s took over the balloon machine. That’s what happened.

We blew up punch balls during the day in the grey, cement floored fire truck bays and stocked the basement of what we called “the hot dog booth” with them. It’s now called The Out Back.

My dad drove his pool of neighborhood helpers nuts running them ragged to and from the stock room, which he supervised for years. I still find myself expecting to see him trolling the crowd, sporting his Brylcreemed hair, a clipboard and pencil behind his ear. I can still hear him hollering at some poor kid for bringing a TV to the stuffed animal booth or telling a bad joke, patting someone on the back and laughing at himself.

The motivation for our kids’ work: Aside from the fact that it was our mandatory inheritance, we got “tickets,” which were like Willy Wonka money in exchange for the hours worked. We got to “spend” them on the fair — rides, food and sodas.

There was no money, just generous hearts, around us. This was the “fair” part of our upbringing and it was a blessing to need that job.

As the fair would draw to a close, we all knew it was time to think about less fun things, like school.

We never won the car. And, in the earlier years, there were closing night festivities with which we were blasted back to year-round reality — sort of. There were fireworks, high wire acts with superheroes and bands playing on the firehouse balcony. They were mighty highfalutin hijinks to us.

And when they packed up that stinkin’ Zipper ride, it always gave me a sense of relief, after a week of gnawing angst trying to avoid riding it with the “cool” kids. The thing still makes an annual appearance at the fair. I never went on it and don’t think I ever will in this lifetime. Still can’t watch people flip upside down on it without getting an anxiety rush and a bellyache.

That fear lingers … as poignantly as those comforting breezes of home-cooked fair scents and flashbacks of Sally and Bill with their hands full of little fair surprises and hearts full of homegrown love … plain and simple.

My dad died in 1983 during the fair, and the usually colorful grounds that year were overcome with pallor and sullen faces.

Those neighborhood kids he annoyed and loved so much saluted him in their own firemen’s dress whites and served as teary pallbearers. His coffin was carried through town in an honorable motorcade filled with fire trucks and flowers.

Years later, the year before my mother died, she worked at the fair, as usual, having had no clue she wouldn’t make it the next year. I was performing in a show out of the area.

I came home to find a stuffed star on the kitchen table with a note that it was a booth reject, but she thought of me. It has hung over my bed since that night. Sometimes it falls and gives me a soft knock in the noggin — a reminder of what I’m left with.

Thanks Mom. Thanks Dad. Thank you Fair Haven Firemen’s Fair.