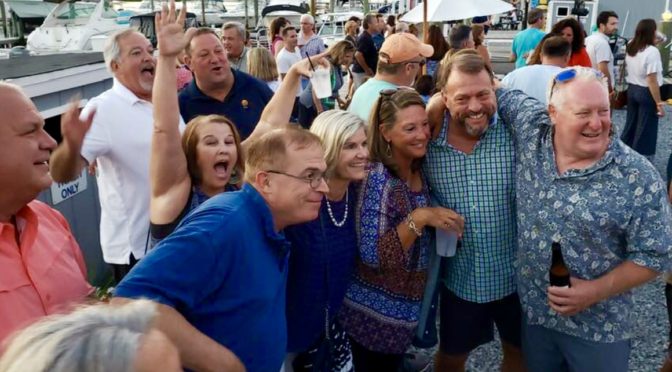 If the song fits …

It was the summer of ’79. Bean bag chairs and Sony Walkmans were cool. Trivial Pursuit was launched. McDonald’s introduced its Happy Meal. A gallon of gas cost 79 cents. Disco dancing was still cruising in popularity. And the number one song on the charts on Aug. 17, 1979 was Good Times.

In Rumson-Fair Haven Regional High School (RFH) land, good times are exactly what a bunch of seniors who had just graduated in June were after. It was that summer of senior year — a summer of fun, milestones and memories. Lifetime connectors.

Bonds. Time. Trends. Music. Dance. Good Times was fitting in that summer of ’79. They were all good times; even the worst were the best. And four decades later, the song was the perfect time capsule to capture the RFH Class of ’79’s 40th reunion on that day, Aug. 17.

In RFH land, while bean bag chairs and Walkmans weren’t spotted on the gala weekend (that may still being going) and games of Trivial Pursuit were likely not played. The class was still cruising around the towns to the old haunts, like Barnacle Bill’s, Undici (formerly the ol’ Hook, Line & Sinker hangout), Even Tide, Salt Creek Grille, Donovan’s and just about any other of their hometown streets. The alligator shirts, topsiders and Rumson Roulette belts have since fazed out, but those good times live on.

“These are those good times! Leave your cares behind” and take a look … (and don’t forget to click to enlarge!)

Thanks to Jackie Iglesias Leslie and Karen Apy for the photos! Congrats on your reuniting, RFH Class of ’79!