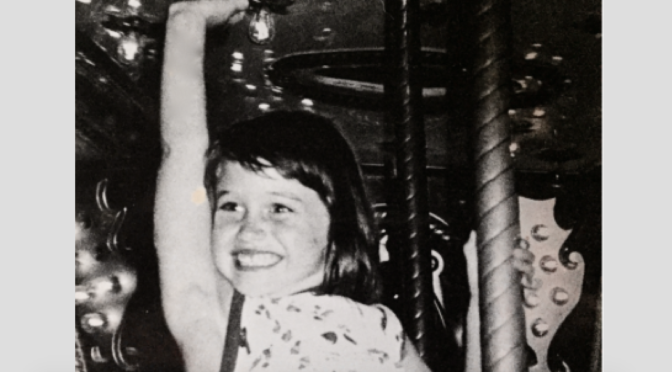 About a quarter of a century ago, a little girl got on the carousel at the Fair Haven Firemen’s Fair and took a ride.

She was beaming and waving as she rode ’round and ’round. The words to the Carousel Waltz in the musical Carousel tell the story of that magical ride: “Ride on the merry-go-round. Ride for a mile for a nickel …” So it goes. The ride, that is. The nickel was probably more like a couple of dollars. The mile ride? Well, it’s a long mile. A very long mile. Call it, instead, a milestone.

It’s fitting. That first ride on the merry-go-round all by yourself at the fair is a moment, a ride, that spans a lifetime. There’s no longer a carousel at the Fair Haven Firemen’s Fair. But the ride, a ride, any ride, this ride is a ride into a cache of classic rewinds for a local. No one ever takes that ride away.

This particular moment was captured in the 1990s at the fair. In fact, Bruce Springsteen, a fair regular, was standing close by at the time. And the ride for this one little girl was the ride of the real star of the show — the one whose moment shone brighter than Bruce. Where her ride took her, no one knows. But it’s a fair guess that at some point it’s taken her back to Fair Haven for another ride.

This girl would probably be about 30 or so now. Recognize her? Your ride moment? Where’d it take you?