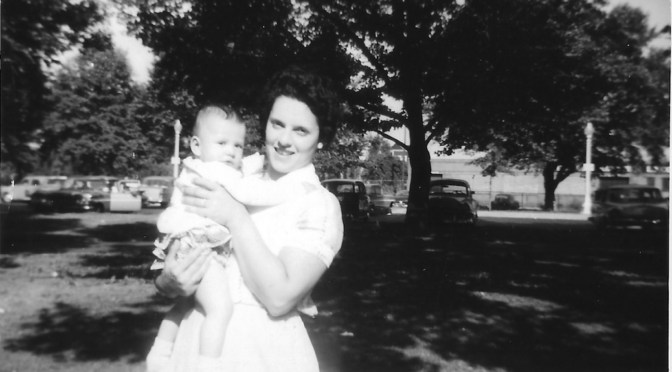 Ever since she can remember, Mary Ann Kampfe loved reading and hearing stories. She remembers.

The book chronicles Kampfe’s journey as a daughter, a caretaker for her widowed mom who came to live with her daughter’s family unaware that dementia had gotten a merciless grip. “At first we didn’t realize what was happening when my assertive mother became unsure of her decisions and her routine,” Kampfe said. “We assumed that Mom had changed her mind about being in charge and was deferring to me and my husband John because she was under our roof. It took a while to discover that Mom hadn’t changed her mind. Her mind had changed Mom.”

The book reminds people that inside the demented mind is the same person who raised a family, cared for others, had her own sense of humor, style, dignity, respect and place in the community. It reminds people that struggles are peppered with perseverance and a positive light — the memories. The reminders of who we all are, not what has become of us because of a memory-robbing disease. Kampfe has her memories. She has her mother’s. She has their lessons. She holds onto the laughter, the light. She remembers.

“When I was in high school, my grandmother moved in with us,” Kampfe recounted. “My mom started out as a companion to her own mother, and then ended up as a caregiver. I remember my mom shaking her head one day and saying, ‘There’s not a lot of help out there for people like me, or for the elderly.’ I think we have come a long way, but caregivers and the elderly are still a largely underserved group.”

The book, she says, is a way of serving those underserved groups. It was borne out of a blog Kampfe started as a release of the hardships, even harmony of her experience. She wrote the first chapter of Dementia Dolls a little more than three years ago, shortly after her mom moved in. She continued to write as her mom’s need for care increased, and a decision was needed regarding her living situation. But there was more than the scrolling, the journaling of it all. Call it a cache of memories with a voice.

“Yes, my book gives a voice to me as a caregiver,” she said. “It also gives a voice to my mom as a daughter, wife, mother ,worker, and caregiver. That is the most rewarding part of writing this book. My mother is so much more than an elderly person with some memory loss. She is well-loved and respected in her nursing facility for her kindness, politeness, impeccable appearance, sense of humor — and even her no-nonsense attitude. She is, and always has been, a force for good in the world. I can only hope that my little story does her justice, and makes caregiving a little less lonely or scary for someone who reads my book.”

While Kampfe’s mother is the heart and inspiration of her book, the community in which she chose to be her own brand of mother was one that inspired.

Kampfe came to Fair Haven in August of 2000 with the quest of raising her family in a community that was billed as a stellar spot for that journey. “But for me it was so much more,” she said. “I befriended terrific people who gave me newfound confidence, and made the connections that further shaped me as a writer. I can honestly say that I would not have written this book if I didn’t live in the midst of the good people of Fair Haven.”

Fourteen years after she found her community niche in Fair Haven, Kampfe’s mom moved in with her and her family. Not long after, she was diagnosed with dementia. Fear is what Kampfe felt when hit with the warped reality of it all. But that fear was quelled by the nurturing sense of neighborhood she had found in her Fair Haven family.

“I can’t tell you how often I would run out of the house on a simple errand and encounter people who asked after my mom’s welfare — and mine as well,” she said. “This kept me going, and encouraged me to share my experiences by writing a blog. And I wouldn’t have been ready to take the plunge into writing the blog, and then a book about my caregiving experience, had I not been taught good writing and editing practices by Jack Shea (supervisor of English and Social Studies at Rumson-Fair Haven Regional High School).”

Shea was the culmination of Kampfe’s writing journey taking the road it did — through the years from a high school student’s experience to one in a teaching environment. She had worked at her high school newspaper, knowing that while her supervisor and English teacher, Tom Cusaker, offered her encouragement to become a journalist, it wasn’t the right fit for her. She felt she wasn’t aggressive and probing enough to be a journalist. She knew she was less of an on-her-feet thinker and more a contemplative one.

From her high school not-so-much journalist experience, Kampfe ended up in college and graduating with a degree in advertising. She landed a job as a direct mail copywriter in New York City. She loved the frenzied, fast-paced advertising world, but “despised writing copy, although I did it for many years,” she said.

After running the advertising arena gamut like a hamster on a running wheel, a dizzied, undaunted Kampfe found herself becoming a Fair Haven mom and wife who sought work as a press release writer at RFH. It was the perfect compromise and it was home. She got the job and was assigned to work with Shea. She credits him for turning her into a “crackerjack writer” and a bigger part of the community she loved as a bonus. It was in this home-based writing work that she found herself immersed in a supportive network.

“That is what I love about writing — the support I am receiving,” she said. “As for my favorite part of writing, I would have to say the surprise that it is not the solitary experience I had imagined. I have received so much support and feedback from my family and friends. And my husband John, an aspiring author himself, put aside his own work-in-progress to support me financially and emotionally.”

Though Kampfe makes it clear that Dementia Dolls is no woe-is-me trip down a rabbit hole. It’s one that celebrates “the fabulous person my mother is and continues to be,” she said.

Her family, her community. It’s a marriage she invites all to share with a sense of humor and love at a book signing at 7 p.m. on May 30 (that’s tomorrow) at River Road Books, 759 River Road in, of course, Fair Haven.

If you can’t make it on May 30, look for more information on Dementia Dolls at www.widopublishing.com. It may also be purchased at amazon.com.